For the beauties of the sea

| Para as belezas do mar

by Ioanna Marathefti with the help of Fred Turuka, Jair Martins de Miranda and Ana Sanches

Yemanja faces her greatest challenge yet; the destruction that mankind has done to the ocean, her domain. She is in a tug of war with the shadow figures, or forces of darkness that embody humanity’s destruction of the planet. She is calling upon the other Orixas, such as Oxalá, the oldest of the Orixas to help.

Our oceans and seas are dying. Filled with plastic, oil spillages and wanton destruction of marine life.

More than 8 million tons of plastic are dumped in the oceans every year. Over 90 percent of seabirds have plastic pieces in their stomachs, while marine mammals are entangled in marine litter.

We were carried by the ocean. Yemanja listened to our sorrows, the water cleansed our wounds. The sailors came to know each rock, every current; at times hard done by the strong winds, and at times soothed by the gentle waves, rhythmically touching the hull of the boat mesmerising our ears. Do you remember the gatherings on the beach at night? The warmth of the sea under the moonlight? The hypnotic movement of jellyfish drifting through the water. Sunset-coloured fish and seahorses playfully dance over the luminous coloured coral and, the Reef, an ‘underwater rainforest’.  This was our treasure. Our treasure, our ocean.

Every drop of saltwater bears Yemanja’s imprint and calls us, her people, back to her, back to our mother and home. We gather on the smooth sandy beaches, the rocky coasts, the tranquil bays and the windy headlands to ask Yemanja for guidance. Our feet caressed by the waves; our messages and wishes in the form of a flower placed in the sea: “Salve Mariana” (Save Mariana) “Proteja nossos recifes” (Protect our Reef), “Defenda nossos Oceanos” (Defend our Oceans), “Proteja nossas aguas” (Protect our rivers and seas).

As we look towards the infinite sea, tasting the salt on our lips, Yemanja replies to our wishes “I have protected you over the years, I have kept your men at sea safe and provided you with life. Now it is your turn to work against the evil. Nature will give you the energy to unite against the atrocities. The present and the future is in your hands”

Stay tuned for our Samba enredo 2018 recording! Watch this space.

In the meantime, here are the lyrics, written by Ioanna Marathefti. Many thanks to Maria Cecilia Barker for translating.

Want to join us for Notting Hill Carnival? Register here for open alas and use the log provided in once you have received your password (where relevant). Check out our pricing table to find out more.

Yemanja faces a “tug of war” with the forces of darkness that embody the harm that humans have done to her domain. Shadow figures or the forces of darkness, that embody the destruction of the ocean by humans. They enter a tug of war between good and evil, against the goddess Yemanja. Cdf forms of dance cover a range of styles from Afro- Brazilian, Street Theatre, Samba no pé. Flat shoes preferred, but if you are comfortable jumping around heels, go for it!

Intermediate to advanced level dance only. Please contact lss.dancenhc.lss@gmail.com to find out if you qualify. Once you have confirmed, you can register HERE 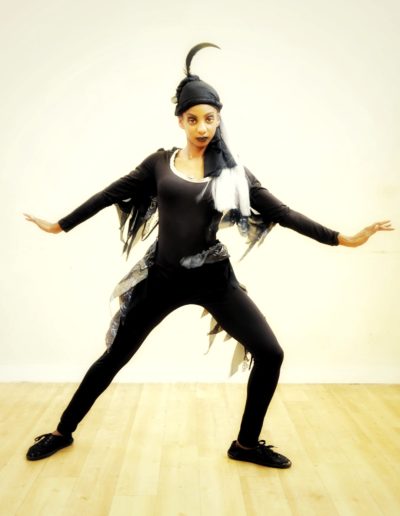 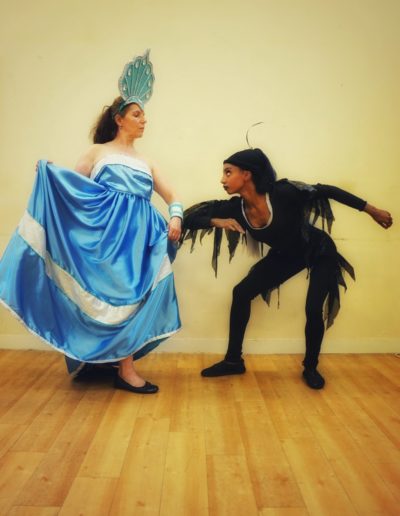 Ala das Baianas – The Sea and the offerings to Yemanja

The Baianas embody the sea itself, in its vast, open blue.

This is an open ala. Please register HERE 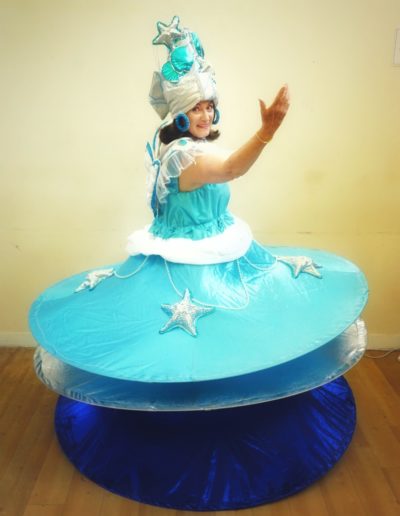 Intermediate- advanced level only- if you have not heard from us already, have previously paraded with us before, or simply wish to find out if you qualify please contact lss.bateria@gmail.com. Once you have confirmed, you can register HERE using the password you have been provided. 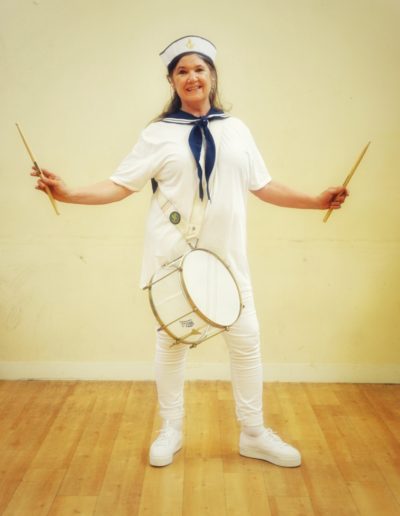 Representing the colours and textures of the “underwater rainforest”. For intermediate to advanced samba dancers, must be proficient in samba no pé. Please contact lss.dancenhc.lss@gmail.com to find out if you qualify. Once you have confirmation, you can register HERE

Please note that extension hair pieces will be provided, bring your own shoes, which must be heels for ladies. 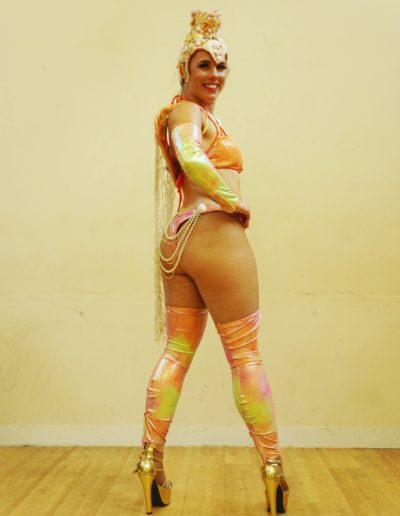 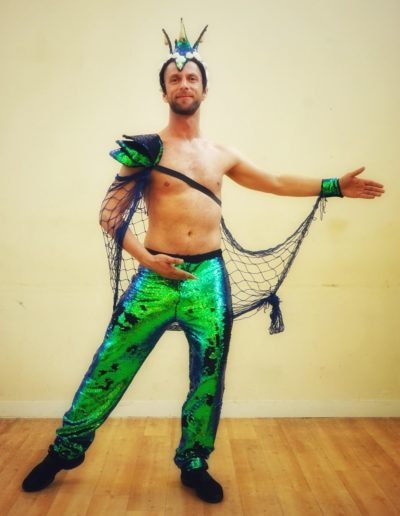 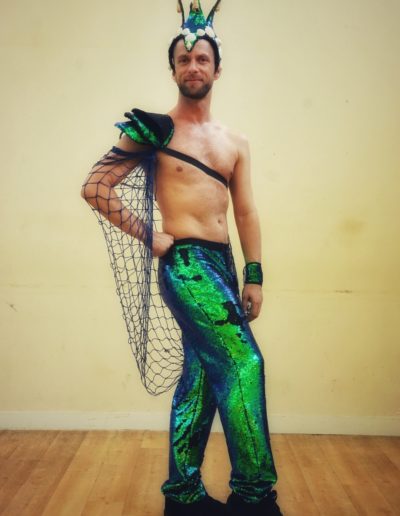 Move as the Jellyfish do, through the currents, wearing colours of the sea; this ala includes an umbrella, which will make for some fun choreography! This is a unisex ala with costume options for both male and female with flat shoes or heels.

This is an open ala, register HERE 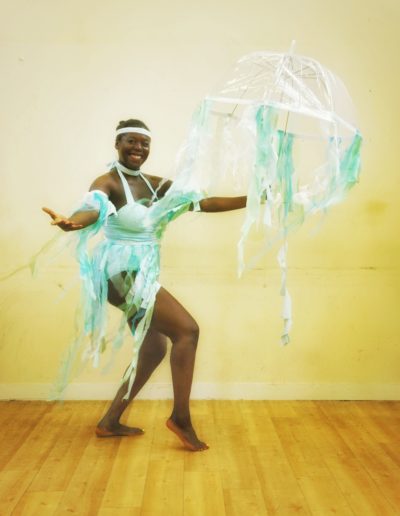 Dazzle the crowd and be the jewel of the sea in this gorgeous design!  Open to all levels and no dance experience neccessary.  You will be taught a routine over carnival weekend.

This is an open Ala.

We welcome participation from families in our carnival.  Please contact [lss.dance.lss@gmail.com or lss.carnivalmanager@gmail.com] for more information about how to take part with your little fish! 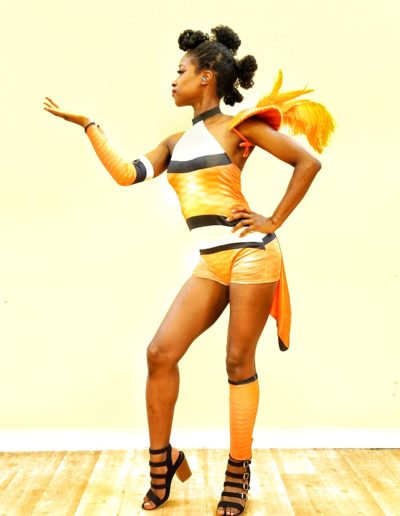 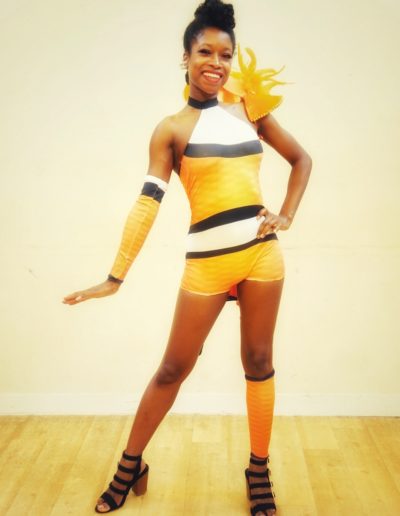 Want to parade with us as a Destque (or highlight)?

Get in touch with the NHC Dance Team! This year, think marine life, or alternatively perhaps you want to embody an Orixa? Here are some suggestions:

guardian of crossroads and divine messenger. All ceremonies begin with an offering to Exú so that he will open the path of communication and carry the prayers of the devotees to the orixás. He is represented with red and black.

Oxum:
young goddess of sweetness, sensuality, beauty, and wealth, associated with fresh rivers and streams, also wife of Xangô. Associated with fertility, her colors are gold and yellow.

Oyá/Iansã
is the goddess of the winds and the storms. She is one of the most sensual, courageous and flirtatious of the female orixás. She is powerful, authoritarian and wages war with weapons in her hands. She dances stirring the air into wind, flirting and advancing into battle. Her colors are bright to earth red. She shares her sacred day, Wednesday, with Xango, and her ceremonial call is “Epa Hei, Iansã.”

orixá of hunters and the hunt, protector of ecological balance, symbolized by the color green. Oxossi is celebrated on Thursday.

deity of iron, metallurgy, tecnhology and warfare, whose color is green.

Interested? Get in touch with the NHC Dance Team